Home » Journal » Over the Edge 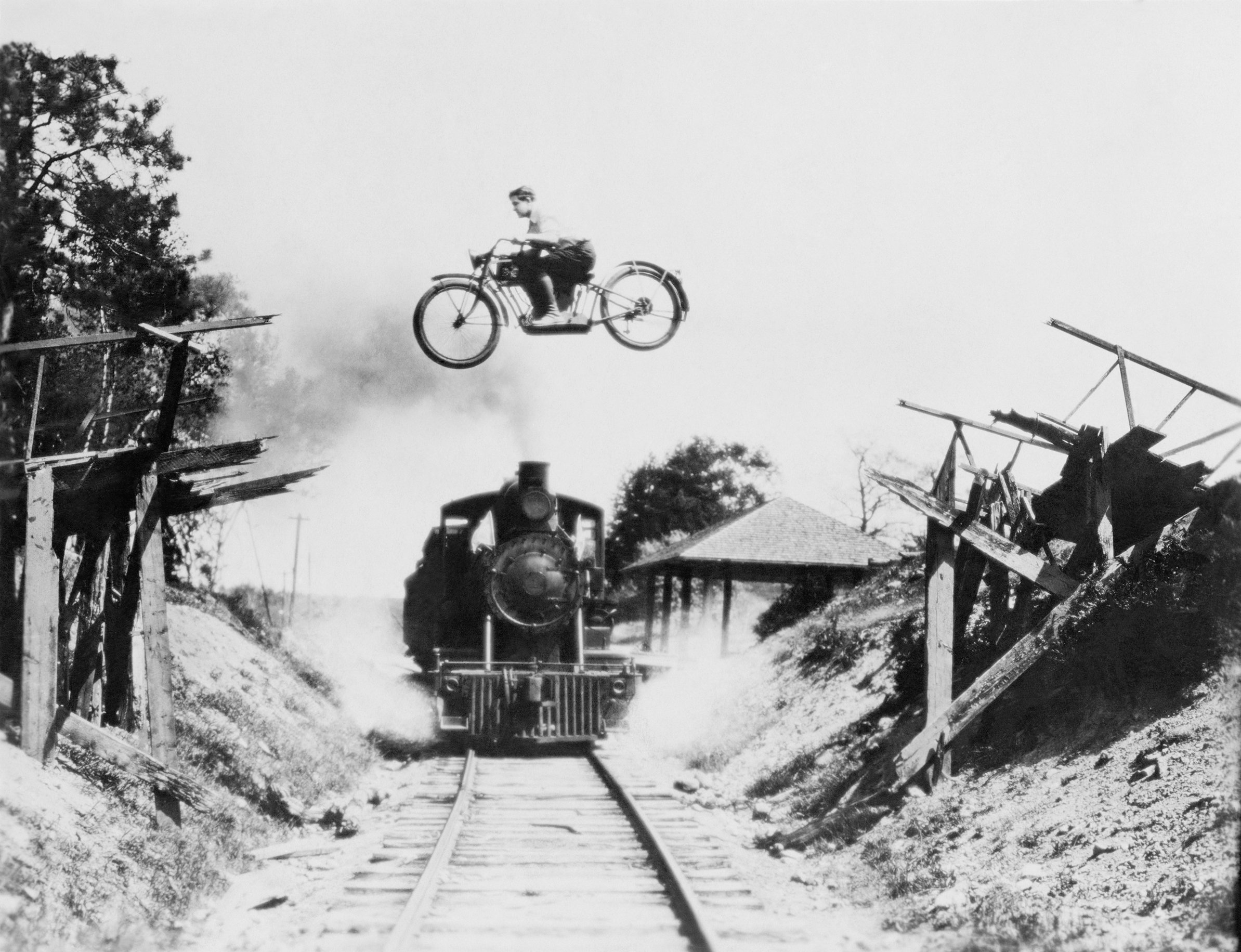 Over the Edge — by Darrin Tripp
by David Finch

As I stand here beside my barrel, mounting a video camera to the top of my hockey helmet and trying desperately to ignore the roar of Horseshoe Falls a mere seven hundred feet down river, my mother’s words resonate stronger than ever: “You really should stick to writing fiction.”

Perhaps she’s right, though I am finding my audiences in nonfiction. My debut memoir was something of a success; I had been diagnosed with Smedlap’s Disease, an obscure variant of an extremely rare and deadly autoimmune disorder, of which only nineteen cases have ever been reported: Ivor Smedlap, myself, and seventeen others. The other eighteen cases proved fatal within a month of first symptoms—those being grogginess and inflamed testicles—but I had managed to survive. I, Darrin Tripp, was a medical marvel. I, Darrin Tripp, had a story to tell. “Moments of Darrin: The Life and Times of a Smedlap’s Survivor and His Search for the Moments That Make Us Human—Memoir of a Medical Marvel” [Putzman Press, $25] clawed its way to bestsellerdom a mere nine days after publication.

“Moments of Darrin” was a big book, not just in terms of sales, but also physically as to accommodate the very long subtitles. Admittedly, the timely death of the eighteenth reported Smedlap’s sufferer—a young man from Ontario—afforded my title some decent exposure on NPR.

During my four-town book tour across Indiana, I received a phone call from my physician’s office explaining that there had been a clerical error—I did not, in fact, have Smedlap’s Disease. I, Darrin Tripp, was no longer a medical marvel, just an accidental bestselling author with inflamed testicles. And just like that, I, Darrin Tripp, had another story to tell. “Darrin to Live: How I Survived Nothing and Lived to Tell About It—The New Life and Times of a Medically Boring Guy—A Memoir” was drafted in less than a month, and although no one at Putzman would return my phone calls I had every reason to believe it would be as big as “Moments.” Imagine my surprise when Putzman’s editor-in-chief tweeted me their rejection: 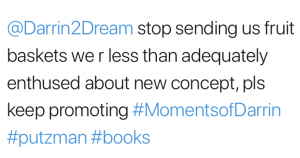 Such is the life of the bestselling author!

With no book contract to speak of, I took to writing for magazines and was disheartened to meet with similar ends. “So, you don’t have an illness no one’s ever heard of?” asked an editor at MedWeek.

I turned the lens outward, pitching in-depth profiles of nationally-recognized educators and scientists to men’s mags like Stank and Baller!!!, though their editorial sensibilities tended to gravitate towards concepts that might actually, you know, sell copies.

“We’d rather see a short list of epic tramp-stamps,” replied one editor. “Give me six legal ways to drug a cocktail — include quotes and pics from hot female sexologists for web extras.”

One night, around 3:00 a.m., I texted my agent to say I was giving up, that I would rather make a career out of boxing kangaroos, shooting myself out of cannons, or jumping motorcycles over casinos than continue to try and eke out a living as a writer. At 3:15 she responded: “I love it. Find a photographer. We’ll call it DAREDEVIL. Send me a proposal.”

I did, and the response from publishers was overwhelmingly—almost woefully— positive. My agent was pleased and I shocked when the venerable Bunim Books prevailed in the auction two weeks later. DAREDEVIL would share the Bunim catalog with “Ivanka’s Favorite Yeats,” “Two Arfs Means Stop: The Paw-tobiography of a Guide Dog,” and a supernatural thriller based on James K. Polk, the third in a series. Frankly, I didn’t believe any publisher would buy this shit. But now, here I am, standing at the water’s edge on a deadline. 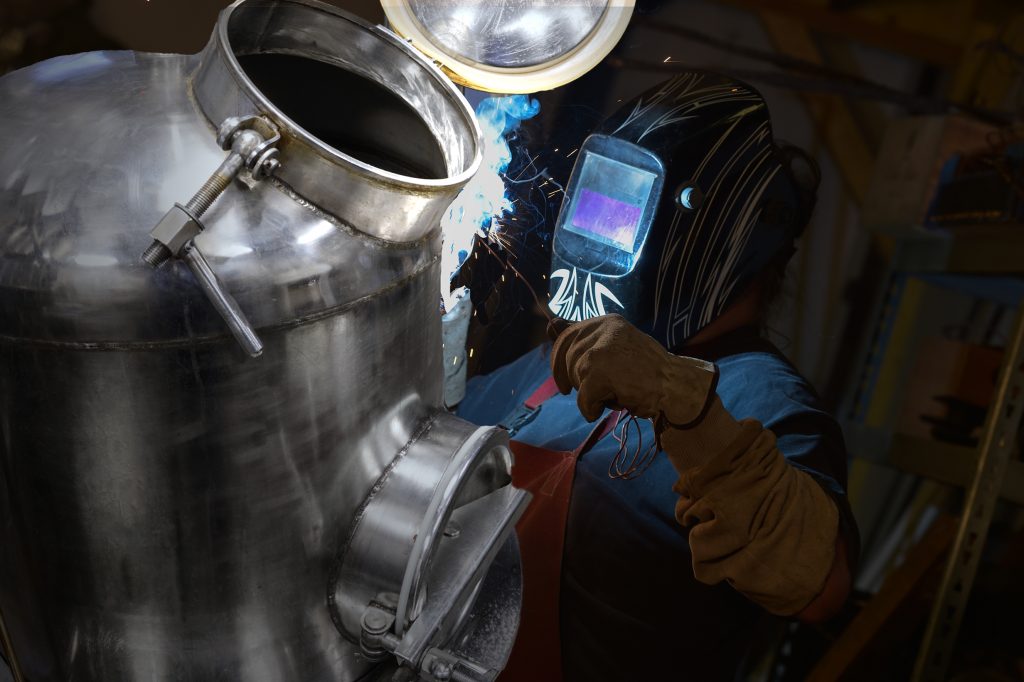 The barrel itself is, in a word, stunning. Designed in Grenoble by retired barrelist Jean-Yves Pois and funded by The Cleghorne Foundation, the barrel is a gleaming metallic example of what can happen when the very desperate and the very rich decide to join forces with the French. Inside the craft, I’ve got a small half-seat with a surprisingly complex seatbelt harness and one armrest—one, goddamnit. Two brake pedals secured to the floor do nothing, and the same goes for the steering wheel. The horn, which bears Jean-Yves’s initials, actually works but I can’t help wondering, what’s the fucking point?

My editor at Bunim promised her publisher that I would film the terrifying descent down the falls, so Jean-Yves included a smallish window outfitted with a wiper blade that I have to actuate manually using a pair of levers. Bunim’s publicity department—an intern named Brian—insists this will make a compelling piece of video content. I think he intends to use the footage to promote all the book store appearances he plans to ask me to arrange and finance on my own. “Any chance you could live tweet your plunge?” he added.

There is a saying among the crustier publishers that the best kind of author is the dead kind; perhaps this is my shot to become one of the greats. I’m trying to keep my wits intact and continue playing the publishing game, but if you want the truth: I hate everything about this. Rejection is easier.

It occurs to me as I’m reviewing my instructions for securing the entry hatch that perhaps I was too quick to dismiss the other genres.

I just can’t help but wonder if Salman Rushdie ever considered riding a barrel over the falls when he was starting out. Would he have been treed by a charging rhinoceros, like I was last month? Or damaged his rectum on a tightrope suspended between two skyscrapers?

He probably listened to his mother and stuck with fiction.